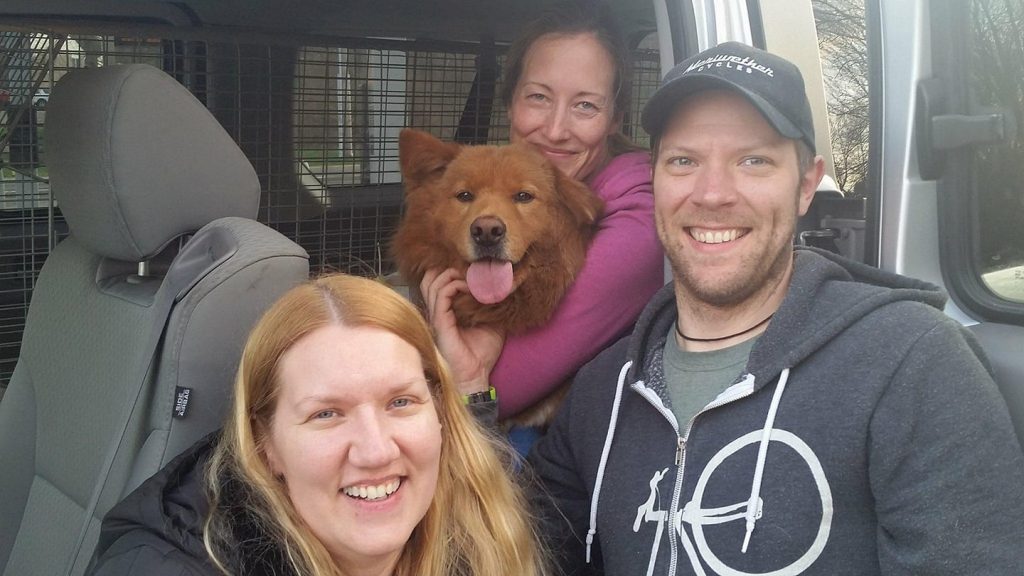 Sarah Hoopingarner’s heart sank when she walked out of the rest area along Interstate 81 in Dorrance Township on April 15.

Two of her three dogs were were tied to a picnic table and her husband Jack was nowhere in sight.

Neither was Hoopingarner’s third dog, Red.

Minutes later, after Hoopingarner put the other two dogs in their camper, Jack emerged and confirmed Sarah’s worst fear.

The Hoopingarners were traveling through the area headed back home to Connecticut after vacationing in North Carolina. The quick stop at the rest area was routine enough, and as Sarah used the restroom Jack walked their three dogs. That’s when Red, who is a 6-year-old chow retriever mix, slipped out of his harness and bolted, setting off a two-week search that tested the Hoopingarners, rallied the Mountain Top community and unveiled a hero.

Immediately after losing Red, the Hoopingarners channeled their panic into rescue mode. They canvassed the Mountain Top area with flyers, desperately followed leads and drove around day and night searching for their dog. Because they had already had their camper with them from vacation, the Hoopingarners parked it near Alberdeen Road hoping Red would find them.

Even though the couple was more than 200 miles from their home in Connecticut, they weren’t going anywhere without Red.

“It was horrific. Our dogs are our kids,” Sarah said. “It was one of the worst things we ever went through, and had it not been for the Mountain Top community we wouldn’t have been able to get through it like we did.”

That first week, the Hoopingarners searched for Red around the clock to the point of exhaustion. Sarah said Mountain Top residents — strangers — were even driving around looking for Red after they read about the plight on Facebook. People routinely stopped by the camper to offer help, drop off food and water and even offered a place to stay.

Meanwhile, sightings kept coming in. Red sightings were reported in Slocum Township, near Church Road, and one call came in from the state police that Red was walking along the interstate in the middle of the night.

The Hoopingarners immediately followed every reported sighting, and at one point Sarah got to within 10 feet of Red. But when she approached, the panicked dog ran again.

“He was in flight mode. He is skittish and his instinct was to run, and keep running,” Sarah said.

On April 22, after seven days of searching, the Hoopingarners were faced with a daunting reality.

They had to go back home. There were jobs to return to back in Connecticut, and they had already been gone for a long time.

Walking back into their home was heartbreaking, Sarah said.

“There was such a void. I would look at Red’s food dish and his toys … it was an awful feeling,” she said. “After a few days, we had to get back and look for Red.”

When the Hoopingarners returned to Mountain Top, they knew they couldn’t continue the search on their own. At 2 a.m. April 26, they sent a message to Tracey Morgan-Chopick, who operates Luzerne County Pet Recovery Services with husband Jeff.

The Hoopingarners pleaded for help, and Morgan-Chopick immediately went to work.

Having recovered countless lost pets over the years, Morgan-Chopick already had a plan. She put out six feed stations in the areas where Red was seen and monitored them with trail cameras. Morgan-Chopick also handed out 400 flyers going door-to-door in the Mountain Top area and posted dozens more in local businesses.

While Morgan-Chopick’s know-how when it came to finding lost pets was invaluable, her advice on what not to do was perhaps most important.

“When a pet runs off, the owner wants to chase and call. That’s the wrong thing to do,” she said. “These animals are in survival mode. When there’s any type of commotion, they’re going to flee.”

That advice played a key role in Red’s rescue.

A day after Luzerne County Pet Recovery Services got involved, they also got a break.

Morgan-Chopick was driving through Mountain Top on April 27 when she got a call from a resident on St. Mary’s Road. The caller saw one of Red’s flyers at the grocery store and told Morgan-Chopick she thought the dog was in her yard.

“I was minutes away. I got to the house, set up a trail camera and a bowl of food and immediately left,” Morgan-Chopick said. “My thought was we’d have to set a trap, but you need to make sure the dog is comfortable coming to the food first.”

Soon after Morgan-Chopick left, the resident called again. Red was back, hit the food and was now lying the yard. Morgan-Chopick was sticking to her plan to set a live trap after Red walked away again.

Later, with everything ready to set the trap, Morgan-Chopick pulled into the driveway and met the resident, who said Red crawled under her porch.

Sarah and Morgan-Chopick’s husband arrived on the scene and the trio converged on the porch, blocking every exit.

“The minute I saw him I wanted to go to him, but Tracey and her husband said you can’t do that. So I talked to him softly and crawled under the porch a bit, and Red scooted to me and I was able to leash him,” Sarah said.

“This entire ordeal had been going on for two weeks. We hadn’t been sleeping. It took me a long time to process that we have Red.”

With Red no longer on the run, Sarah and Morgan-Chopick drove back to Jack who had no idea the mission was complete.

“Red was so happy and Jack and Sarah were crying hysterically. That moment makes all the work and effort worth it,” Morgan-Chopick said.

Link to the original article: https://www.timesleader.com/top-stories/702623/red-on-the-run-couple-loses-dog-in-mt-top-area-setting-off-2-week-search#