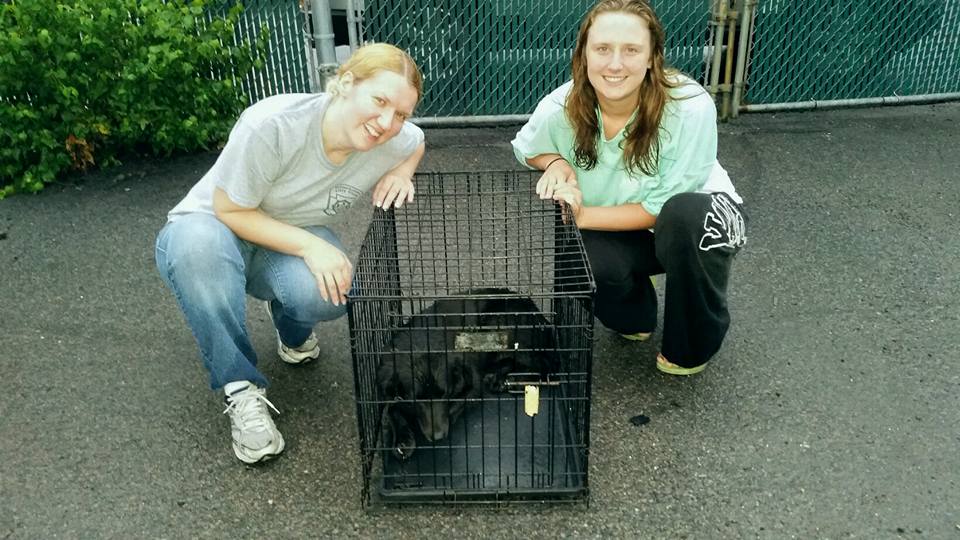 Lucy went missing around 12 am on 07/30/16 from Kingston. Her foster mom Emma called me for help early this morning. I immediately went out and looked for Lucy for a few hours, then had to go work another case that I promised I would help with today that I already had on the schedule. There were no sightings of Lucy until later this evening likely because of the rain and her fear level she was hiding

Emma called me that Lucy was spotted and we got there in less than 10 minutes. But, Lucy was nowhere to be found and it was pouring again. I setup food stations in the area to keep her there. We stayed in the area and looked around and knew she had to be close. Then we received a message from Stacey that was listening to the scanner. She said a Kingston Police Officer just saw Lucy and couldn’t get her and he had to leave. But, would be back. We continued to look around and a call came in from 911 that the same Officer spotted Lucy. We were less than a block away an immediately went there. I got out of the car and the Officer was watching Lucy from afar. He said she was scared and knew he wasn’t going to get close to her. Thank you for NOT chasing her.

I went down the side of the building and sent Emma around the far side around the block in case she came out the back side. I got to the back of the building and 80% of the area was fenced in. I started to look in the unfenced part and knew she didn’t get far and I turn around and she is barking her head off at me. Thanks for giving up your position girl. 🙂

She went back out towards the road and Shawn (Emma’s boyfriend) saw her coming. He laid down on the ground and Lucy came to him and he was able to grab her. A risky move that unfortunately didn’t work. His heart was in the right place, unfortunately Lucy’s fear took over and she scratched and bit (nothing serious) him until she was free.  😥

She then ran back across Division St. The Officer went one way in his car and said the area was all fenced. Emma and I then pushed her into the furthest part of the lot where she entered an open gate. I yelled to Jeff to block the opening with car, he quickly pulled up and blocked it. Thank God there was a gate that we were able to close and secure once we entered the area. Ok, we have her in this huge fenced in area with a ton of dumpsters…now what?

Lucy was very scared and I wanted to get her calmed down before we attempted to leash her. I noticed that the fence on the left side of the lot wasn’t secure and knew we had to keep her on the right side of the area or she would be able to escape. We all got down on the ground and I put food out for her. Meanwhile it is raining and we are soaked and muddy and she is circling us trying to figure out her next move. She calmed down enough to eat the food and follow me around a bit and I got her to relax enough to eat off of a fork I was holding. But, I know dogs like Lucy one sound or movement and she would be gone. She started to relax and signal me that she was exhausted, but still nervous and unsure. She sat down, then laid down, then curled up in a ball and went to sleep a few feet from me and Emma. Good girl…we are just trying to help you Lucy. 🙂

Shawn ran home and grabbed her crate that we put food in….she did the old stretch and grab and didn’t want to fully go in. The crate was a little small and we were hoping a bigger one may work. While this was going on a worker pulled up to lock the gate, not knowing what was going on. We explained the situation and he was very nice and ran home to get us a larger crate to try. Another gentleman that worked there also pulled up that was watching the whole thing on the video surveillance. Both very nice guys and very patient with the crazy people trying to get this dog. 🙂 They even offered to go fix the left side of the fence, so she couldn’t get out.

I always have a backup plan and am thinking the whole time I’m sitting on that wet cold ground. What can we use here to our advantage? Dumpsters? Yes, dumpsters. The whole lot was full of dumpsters and the area on the right had a few that were close together. I thought if we can get her back in between the dumpsters we can “box” her in the corner of the fence. A long shot, but doable if she would follow me and if we all worked together at the same time.

Plan in place, lured Lucy back there. I had Emma go between 2 dumpsters and block her path out and Jeff go between the other side of that dumpster and the fence to block that side. I took the other side, the larger opening side that I couldn’t entirely block because of how big it was. We had her boxed in, but I had to be careful she didn’t escape my side and I was the one with the slip lead. I attempted a few times with the lead and was very close. But, Lucy expressed her dismay to me strongly and we needed another plan. I got your message loud and clear Lucy, but I’m still now letting you out of here or pass me so think again little girl.

I had Shawn enter the fence and grab my catch pole that Lucy was sleeping by before. I had Shawn take Jeff’s spot to block and had Jeff come around to my side with the catch pole. I blocked, Jeff got the catch pole over her and we got her. She wasn’t thrilled for a minute, but then she nicely walked to her crate and we got her into the crate. Then Jeff and I carried her in the crate and put her in the car.
Lucy has had a rough life and was found as a stray in Georgia. She was being fostered by someone else and escaped before. She is very scared, but wants to trust and will be an awesome dog with time and patience. I have seen this type of dog before and they are well worth the time and energy to make them confident happy well adjusted dogs.

Thank you to the Kingston Police Officer (sorry I didn’t get your name sir, but I will) that spotted Lucy and assisted us in pushing her into the fenced in area, it was a tremendous help in us getting her home. Thank you to Emma and Shawn for calling us and trusting us to help Lucy. Thank you to the 2 gentlemen from ABC Hauling for your kindness, patience and willingness to help with anything we needed. And thank you to my hubby for always helping, getting that lead around Lucy and for being as crazy and passionate as I am in helping these animals. Whatever it takes, we are always up for the challenge. You all ROCK thank you a million times.

Apparently Jeff was taking some photos of us that I didn’t know about because I was so focused on Lucy. That’s me and Lucy’s foster mom Emma in the photos. Notice her sleeping in one of them.  🙂 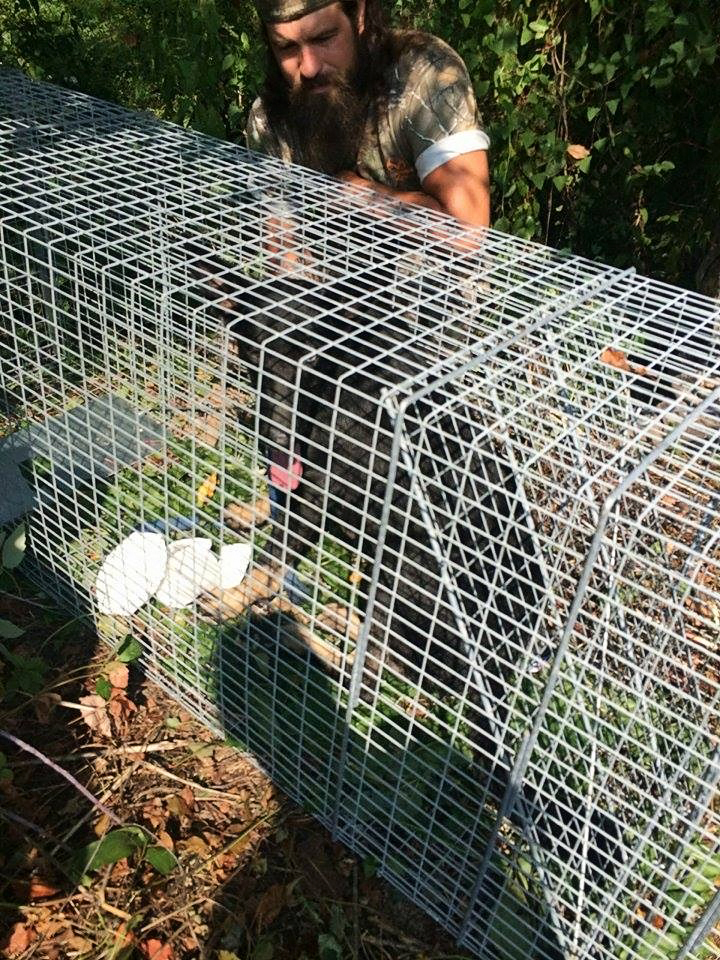 Onyx went missing on Saturday, August 29th when she pulled away from the owner while on a walk. She took off with her leash still attached. She made it over 5 miles to Sheatown where she was safely trapped today September 2nd.

We had a sighting by the owner yesterday deep in the woods and of course Onyx ran like most lost dogs do. Yesterday I asked the owner to take me to where he saw Onyx in the woods. It was way too far into the woods and not a good spot to trap and way too much quad activity back there. So, I asked the owner to show me the other area she was seen in to see if that was a better spot. As soon as we got there, it was a much better spot and an area where we could lure her out of the woods and not have to go into the woods and scare her. I knocked on the door of the house close to where she was seen and asked for permission to search the woods behind their house. Not even 5 minutes after looking, Onyx appeared and looked right at us and headed towards us. But, then she turned and went over and walked past my car and then sniffed the owner’s car and headed back into the woods. We quickly setup the trap and prepared for a very long night.

We checked the trap every 2 hours and nothing. Around 5 am I headed up to check the trap again and no sign of her, I refreshed the food and headed back out to work. She was seen in that area around 10:30 the day before and I had a good feeling she would be making another appearance there today around the same time and sure enough she did!!! The trap was checked around 10 am and no Onyx. But, then the homeowner called me where I had the trap set before 11 am and said I swear I just heard a dog bark in the woods. I told her it was most likely her and asked if she would be so kind to take a walk out to the front of her home to check. She graciously did and sure enough I heard Onyx barking as she was walking towards the trap and she said….”she is in the trap!!!” Words I live for… smile emoticon I called the owners Dave and Sabrina and they were thrilled!!!

Onyx has lost weight, has some scraps/cuts, is full of burrs (those buggers hurt I was covered in them last night) and most likely ticks. She will be seeing the vet for treatment. Onyx looked rough last night because of the heat and was exhausted and probably dehydrated. Thankfully, those are all things that can be treated and fixed though.

I would like to thank the homeowner’s that graciously without a second thought allowed me to search their yard and called me to tell me they heard her barking (I’m sorry I didn’t get your names). Thank you to the owners Dave and Sabrina for trusting me to get their baby back, it is a long and sometimes strange process to people that have never experienced a lost dog before….thanks for sticking with me and believing in the methods to my madness.

Thank you to my hubby that kept me company last night for trap checks and for always loading the trap in the car. smile emoticon And a special thanks to my friend Stacie for coming out to search last night, helping me setup the trap, and for meeting the owner to get Onyx safely out of the trap while I was at work. You ROCK and I am proud to have you as a friend and a fellow crazy animal lover. 🙂